Availability of palliative health care in the Czech Republic – Observations from practices.

Presumptions:
Every year over 100 000 people die each year in the CR. More than 70% of them require palliative aid at the end of their lives. 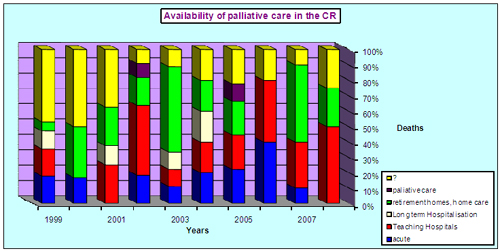 The Health and Social Reform is however lagging behind the reform of the economy, and greater progress has only been achieved in the last 2 years. Assuring, mediation and rendition of services of practical palliative health care is one of the errands of the general practicioners. In the CR there are 55-65000 terminally ill patients that require it. That is why the CMA J.E. Purkyne has created in the year 2005 a Recommended procedures for general practicioners-Palliative care methodology.

Goals
of the afore mentioned monitoring were to find out if the reform attempts of the state and the new education enterprises undertaken by the professional community aid in the availability of palliative medical care.

Method:
The author studied the health documentation of registered patients that died in the interval between the 1.1. 1999 to 25.5.2008. For the purposes of this study „sudden death“ was defined as a death that occurred within 7 days from determination of the terminal diagnosis – these included automobile accidents, heart attacks, suicides. Deaths that occurred more than 7 days after the determination of the diagnosis were divided according to the place of death of the patient into subcategories: Teaching hospitals, (departments of causal therapy: usually internal medicine or neurological departments), departments for long term care (intended for symptomatic therapy, but without palliative health care lege artis), rest homes (private apartments with health provisions), hospices with palliative care lege artis. A separate category is formed by „unknown“, which is given by the non-existence of gate keeping de facto, so that many times the practitioner finds out that his patient has died from a notification from the health insurance company that „health insurance contract has been ended“.

From the results it is clear,
that the use and availability of palliative health care is increasing only slowly. A positive sign is that the terminal patients are no longer being treated on acute causel beds. A large portion of the care for terminally sick patients should be a team of the general practitioner and home care.

Discussion: recommendations and measures.
The basis is completing the Social and Health reform so that there would be an increase in financial and moral motivation for the forming of hospices.
The seconds step should be the education of general practitioners.
Simultaneously an information campaign should be started that would inform the general populaceof the newly formed hospices.